Golf suffers from name-brand fever. It’s a real problem. I’ll concede this: for certain clubs it actually makes sense to go with a Callaway or a TaylorMade. This is especially true of drivers and other woods where the technology is getting pushed farther and farther every year.

It’s not true of putters. Here’s a dirty little secret for you: there is no objective standard as to what makes a putter good. You could putt with a rock tied to a stick of that was what felt right for you.

That’s why I like Ray Cook Putters so much. They are affordable, effective, and they look nice. So, with all of that said, let’s get right to it, shall we? Read on for a Ray Cook Gyro Putter review! 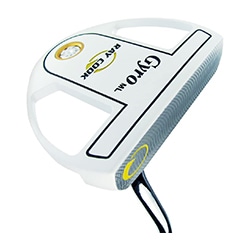 The Ray Cook Putter left me with little not to like. Durability is a concern, but the value and clean look of the club go a long way towards making it a competitive choice for buyers of all variety.

Things To Consider When Buying A Putter

As mentioned above, putters are a little bit different than any other piece of equipment because there is no gold standard as to what is good and what’s not. Still, here are a few general considerations that will help you to make the best putter-related choices possible.

Technically there are thousands of different putter head shapes. Obviously, every club features a unique design concept. However, for the sake of convenience, you can truncate pretty much any putter into one of two design themes: mallet or blade.

Blade putters usually favor players that use a long, flowing stroke. Mallets, on the other hand, usually work better with shorter, back, and through style strokes.

Of course, there is no hard and fast rule saying as much. It’s just a generalization that applies well to most people.

There is a variety of different shaft flexes available with just about any club that you can think of. The majority of players are going to favor regular or stiff flex shafts. If you have a high swing speed, the stiffer option will be right for you. However, if you’re swing speed is a little bit more average, you will be better served by a regular flex club.

You can also find extra stiff shafts, and senior flex clubs if your swing speed is very fast, or slower than average respectively.

For a while, heavy putters were a fad. Clubs that were so hefty it was almost impossible to get jerky or weird with your stroke. The problem is that when a putter is excessively heavy, it can be really hard to play with on slow greens.

Still, there is something to be said for clubs that are slightly heavier than average. The extra weight naturally stabilizes the stroke making it easier to sink putts in that knee-knocking five-foot range.

To make matters easier, some putters can be adjusted with removable weights so you can play around a little bit to find the feel that works best for you.

How the club looks is super important. Putting is all about confidence, and your goal should be to show up to the green with a putter that makes you feel positive you can make whatever putt you’re faced with.

Naturally, everyone has their own idea of what the right look for a putter is. You just have to decide for yourself.

It’s a good idea to play around with a putter in person for a while if you can. Feel matters just as much as design and it is equally subjective. You get a putter that looks right and feels good, and you are in good shape.

Classic, simple, and affordable, the Ray Cook Gyro has everything you could want from a putter (besides maybe a decent name). The face is milled to create a nice solid feel, while the mallet-style design is optimized for lining up putts.

It even comes with a nice headcover that will keep the club from getting banged up in your bag. There isn’t a ton to complain about really, though I did notice that some of the components felt a little bit cheap.

I noticed this mostly in the grip: the rubber was low quality and felt as though it might split or tear at any moment. Fortunately, the grip is a relatively small problem. You can get a putter regripped for under twenty bucks at most pro shops and golf stores.

I also noticed that the shaft felt a little bit fragile as well. That said, if you can refrain from testing it against your knee (hey, we all lose our tempers on the course occasionally) you shouldn’t have any problems.

Now, let’s take a close look at some important features and benefits of this awesome putter.

One of the nicest things about this putter is the very design of the head itself. The mallet-style design is specifically made to make putts as easy to line up as possible. This is accomplished through a series of sightlines that make it crystal clear where you should be aiming for on the face.

The club also features a ball-sized indentation on the back of the putter that further improves your ability to aim and align the club.

I don’t want to overplay this inclusion because the truth of the matter is that many putters come with a headcover. When you buy a high-end option from a major manufacturer it’s a pretty standard inclusion.

You don’t see it so much with these off-brand clubs though. It’s nice because headcovers truly are handy to have on hand. As you ride or walk around the course, your clubs bang around quite a bit. This isn’t an enormous deal with the irons (they’re tough and can take it) but putters it can spell certain doom.

Why? The flat stick is usually made with softer metals, which means it showcases bumps and bruises much more prominently. The headcover helps to prevent this.

The white finish has been popular for a few years now. At first, I wasn’t extremely partial. Personally, I prefer a very clean, traditional putter on the greens. However, it turns out there is actually something to be said for it.

White putters naturally stand out well on the green. There is something about the contrast that helps a lot of players to focus better and hit purer putts. Is it an exact science? Nope. But a lot of people are having crazy success just by switching the color of their putter. Weird, huh?

I liked the feel of the club faces a lot. It’s milled with textured steel to produce a soft but satisfying feeling that you don’t usually find with putters in this price range. It reminded me quite a bit of more expensive putters I’ve played with, like Never Compromise or even Ping.

If you like a good solid feel, you’ll really appreciate the experience that this putter gives you.

What People Are Saying About Ray Cook Gyro Putter?

I also always like to check in with players who regularly use the clubs I review in their bags to see what they think.

Based on everything I’ve heard, people are having experiences not unlike my own with this putter. Many users are surprised by the solid feel and the intelligent design concept that they found with this club.

They also echoed that the components aside from the head felt a little cheap. However, getting a new aftermarket grip from your local golf shop can go a long way towards solving that problem.

So that’s that. Our Ray Cook putter review is over and now it’s time for you to make your decision. Is this going to be the right club for you? Personally, I think it’s going to be a solid choice for most players that are looking for an affordable mallet putter that feels and looks great.

The shortcomings are really pretty minimal, and for the most part largely in line with what one would expect from a club in this price range. All in all, it’s a great club that leaves almost nothing to complain about.

An avid scratch golfer dedicated to expanding the future of golf. I am committed to providing the most up-to-date advice and expertize to assist everyone, from novice to expert, improve their game.